Hereditary cystic kidney diseases represent one of the  most important causes of end stage renal disease in childhood. The main representatives are autosomal recessive polycystic kidney disease (ARPKD), nephronophthisis and related ciliopathies (NPH/NPH-RC), Bardet – Biedl Syndrome and  hepatocyte nuclear factor-1beta nephropathy (HNF1B). As rare diseases their incidences range from 1:5000 to 1:100000. In Germany approximately 300-450 children are affected. Most of those diseases follow an autosomal – recessive inheritance except HNF1B nephropathy which inherited in an autosomal – dominant manner.

Cystic kidney diseases can affect exclusively the kidneys or they can be part of syndromic diseases that affect different other organs, especially the eyes, liver, endocrine organs or the skeleton.

During the past years far over 70 disease – causing genes could be identified. Most of those genes are responsible for the correct structure and function of primary cilia. Primary cilia are antenna-like multi-functional structures on the cell surface. They are important for cell-division, cell-orientation, fotoreception, mechanoreception and signal transduction e.g. in growth and development. (s. “of cilia and cysts“)

Despite the tremendous scientific progress in the last years, the underlying pathomechanisms are still not fully understood.

There is significant phenotypic and genotypic overlap as well as an important genotypic heterogenicity. One disease can be caused by multiple genes while at the same time dysfunction of one gene can cause different phenotypes. A variety of organs can be affected to different extents. Thus end stage renal disease can progress differently in patients with the same genetic defect.

Making the diagnosis is challanging for treating doctors as well as for patients.

Affected structures of the primary cilium

Most of the affected genes in hereditary cystic kidney diseases encode for proteins of the primary cilium. They often have functions in the tranzition zone, the basal body or the intraflagellar transport. (10) 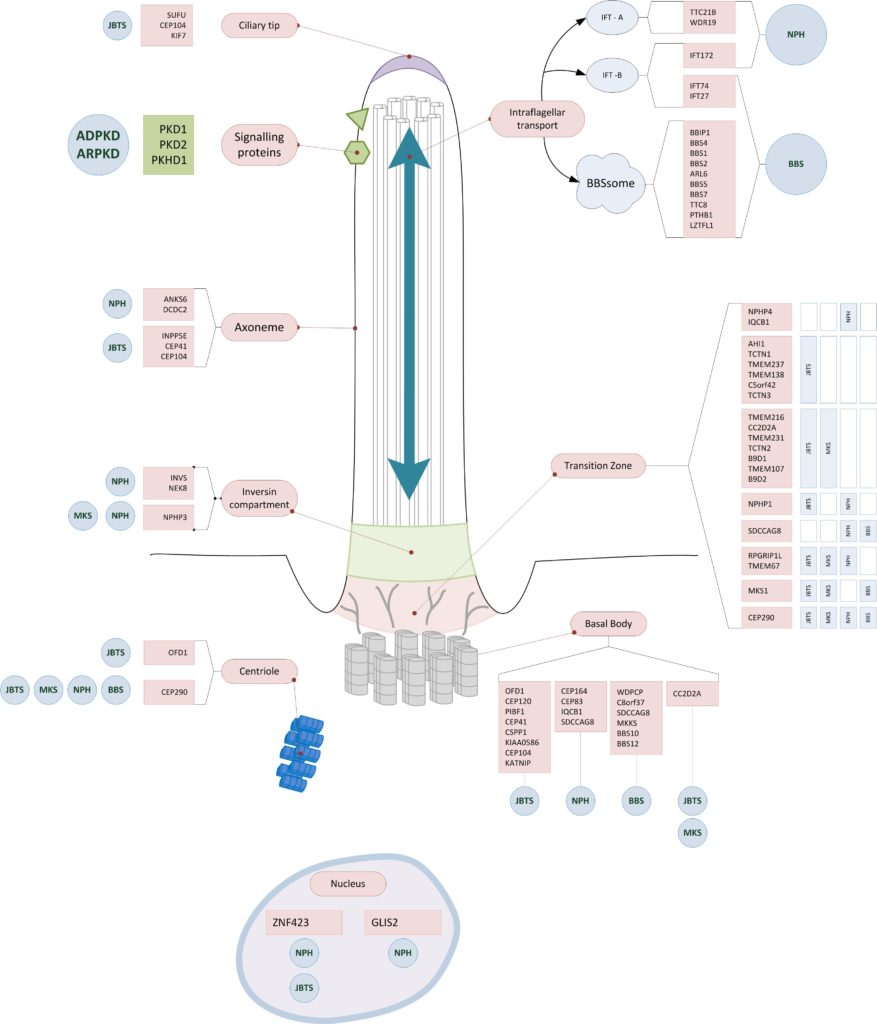